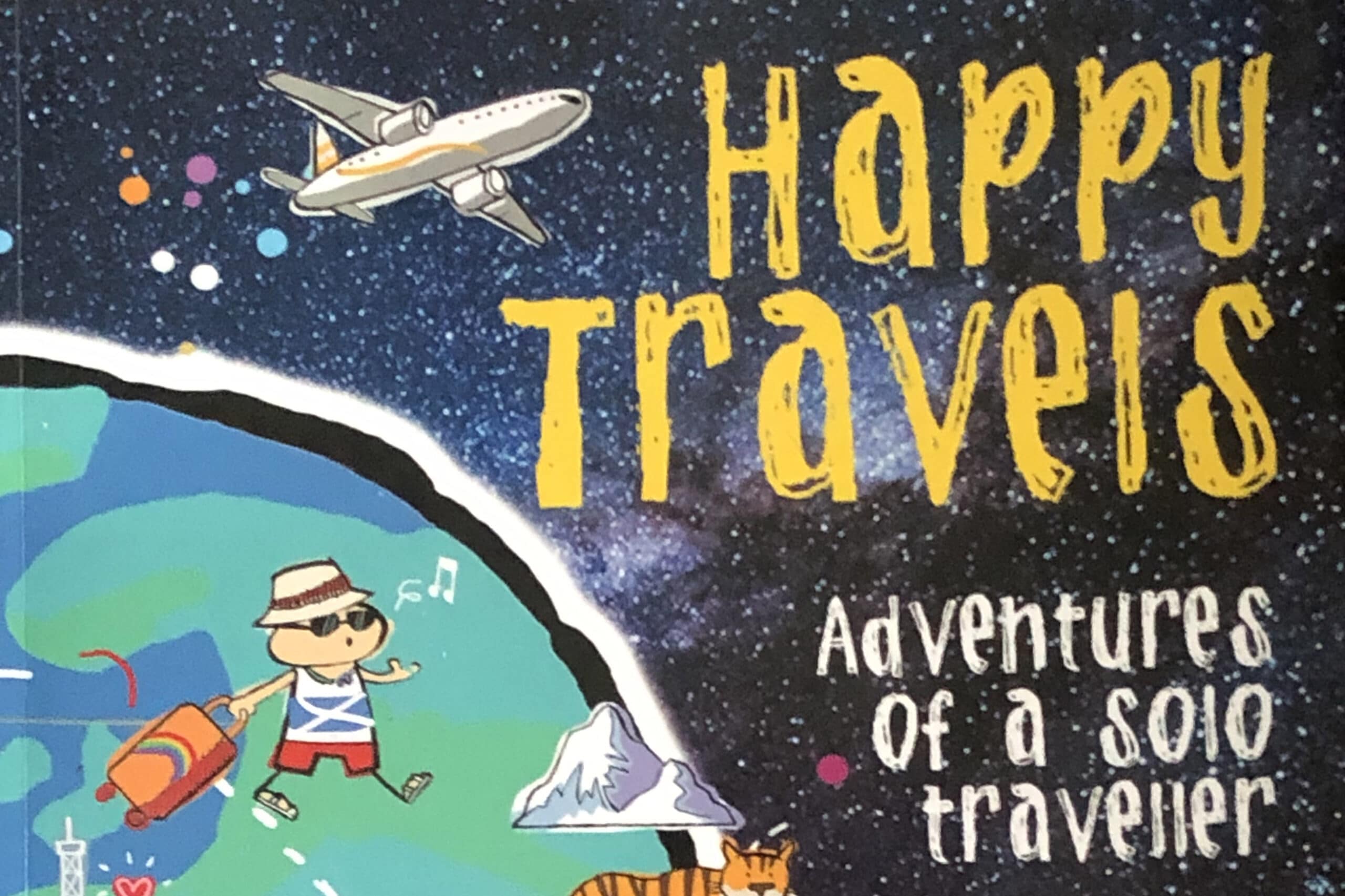 If you took an international holiday every year of your adult life, by the age of 65 that’s 50 trips experiencing new cultures and meeting people from all over the world.

Something wonderful to look back on – if you don’t tot up the cost, the wasted time in airports, the preparation, and all those things you forgot to take, and regret not bringing back.

But that’s not how Stewart Noble does holidays. In his new book, Happy Travels – Adventures of a Solo Traveller, he records an epic holiday starting and ending in Forres, by taking in a massive 113 destinations in 24 countries, which he splits up into fifty chapters. It’s a lifetime of holidays in one trip, all around the world, with one bag slung over his shoulder and a map printed on a beach ball.

What’s the worst that could happen, he muses at the start, realising that the answer to that question is of course, that he could die! That doesn’t deter him.

But it’s definitely not everyone’s cup of tea. However, sitting in a world largely devoid of holiday fun at the moment, Stewart’s decision to log his globe-trotting antics and publish them in a book is equally simple and definitely is my cup of tea.

I’d rather read about the cow in Jaipur that defecated all over his sandals, than experience it fo myself. To me, that’s not culture, although it may be full of it. But anyone who knows Stewart knows he is a people person, someone who wants to eat the food the locals do, sleep in the beds the locals sleep in, and swap his traveller’s tales with local anecdotes, wherever he finds himself.

He’s down to earth, and sometimes covered in it, and his book is a record of his journey around the globe starting and ending in Forres. His route was determined by a string of AirBnB guests he has hosted himself, and who put a pin in his map (not the beach ball one) to mark a destination for him to visit. A journey which would start when he ran out of pins.

If you’re thinking a world tour needs a helicopter over the Niagara Falls, a cruise up the Zambesi with dinner at the captain’s table and an air-conditioned limousine ride through Colcatta, then this isn’t your type of book. If you want desert dirt between your toes, stomach bugs that are cured with powdered reptiles and communal travel inside a rusty vehicle with windows riveted shut in a searing 40-degree heat, then you’ll relish this read.

A blog on paper

It’s a travel blog on paper, it’s written as it happens or at least you feel that way. Even if your travel fix comes from vlogs, then you’ll regularly wander off into a ‘head video’, because you can easily muster up the visuals in the easy-to-digest chapters of this volume.

It’s a self-published book, which in fact does it a huge favour. A travel publisher would never have allowed so many pictures of the author himself, unless it was Michael Palin. But as a book about a man having a good time all over the world, it adds a depth of personality you don’t get in a travel guide – it’s not called Happy Travels for nothing.

But don’t get me wrong, it’s not a book about Stewart Noble, it’s a book about the destinations he finds himself. The locals, the locales, the food, the customs, the quirks, the language barrier, and very much about making friends with people from the deepest and darkest part of the world. Stewart shines a light on some of the realities of travelling in third world countries, as well as the excesses and costs of the developed world.

To list the countries he visited would be to spoil the surprise, but it includes every continent except Antartica. He travelled from Scotland to Saigon, Mexico to Myanmar and Vietnam to Valparaiso (look it up), and all manner places in between.

It’s chock full of colourful pictures, the kind you will see in travel guides, but they’re laid out in a rather captivating index style on the edge of the page. It’s almost like you can flick through it till one of them catches your eye, and that’s your next holiday. A sort of travel ‘Wheel of Fortune’.

Is it a travel guide? Well, yes and no, it’s a hybrid. While Stewart doesn’t call it a ‘guide’, he does add his own tips and comment throughout the text and conveniently as a bullet list in some chapters, so he’s doing his bit to guide you. It’s also a very entertaining read, I’ve enjoyed reading about places I will never go, or should I say I won’t go now I’ve read about them! But to be fair, I now want to go places I never would have thought of going – I’m looking at you, Myanmar.

Whether you read it from cover to cover, or pick it up and read only your travel-relevant chapter, you’ll enjoy this book, and while every man’s ‘world tour’ is probably going to be tailored to themselves, I’d like to think that the ‘noble journey’ is one that could be followed again and again. After all, he came back alive, and that’s the one thing you must do wherever you go on holiday.

Happy Travels – Adventures of a Solo Traveller is available as paperback in large (£20) or pocket-size (£10) at the Festive Market Shop, High Street, Forres and Amazon