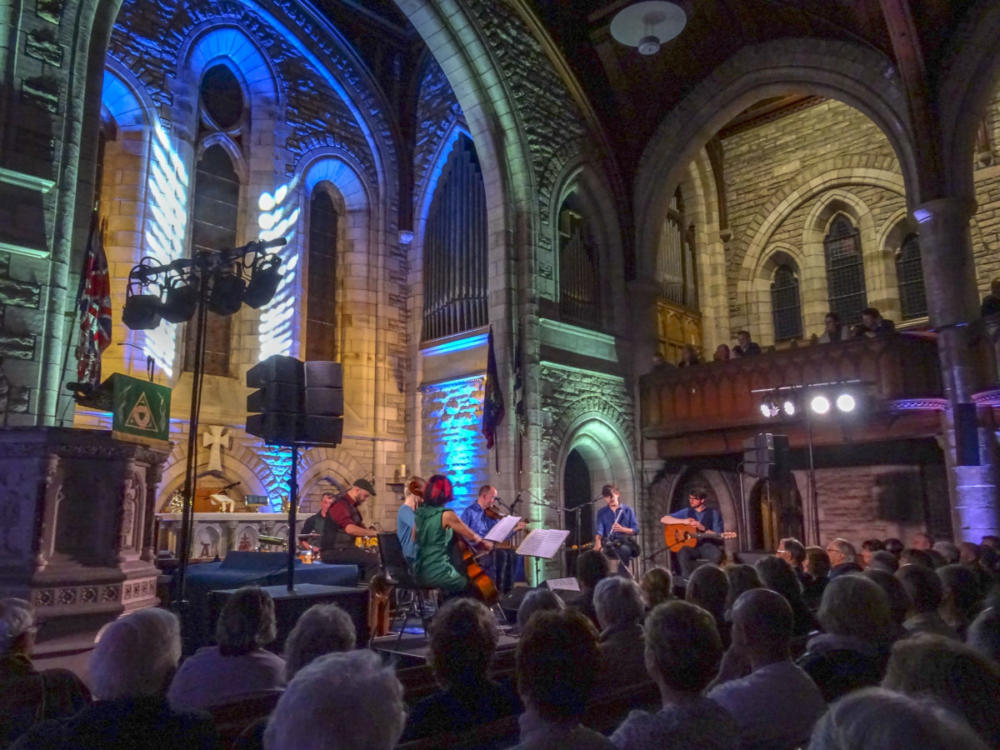 It’s nearly 200 years since German composer Felix Mendelssohn famously visited the west coast island of Staffa and was so inspired by it that he wrote an overture which arguably personified the Hebrides. Scottish fiddler Duncan Chisholm recently visited remote Sandwood Bay in north-west Sutherland and was similarly inspired to write a whole album of immersive atmospheric music.

Whether or not it will be recorded in the history books remains to be seen, but it should. Chisholm is every bit the outstanding artist today that Mendelssohn was in the 1830s, perhaps more so, because he plays what he writes.

And not only plays it, but feels it, and lives it. The fact he has written tunes about his two young sons and his grandfather shows how deeply woven his music is with his existence. 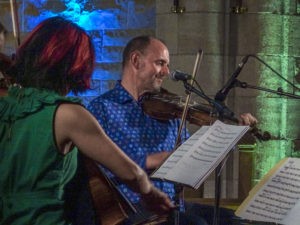 At the opening concert for the Findhorn Bay Festival, Duncan Chisholm brought his band The Gathering to the stunning St Laurence Church in Forres, suitably lit for the occasion and suitably sold out given the man and band’s popularity and following. The large church provides a superb stage and auditorium for such moving performances.

Chisholm was principally playing tracks from the new album he has called simply Sandwood. And there is little doubt the north-western frontier of the Highlands has had a profound effect on the modern-day composer.

Listening to The Gathering as a band, with Chisholm positioned like a keystone in their semi-circle configuration, the arrangement has a distinct sound that transfers across their whole repertoire, whether classical or traditional.

Chisholm told us which tunes were from the new album or whether they were from old stock. This made it clear to see how their style permeated all their work, and the influence of the second fiddle, cello, piano, uilleann pipes, whistle, flute and guitar. Not forgetting the percussion. Even in a church hewn from solid rock, the drums resonated through the floor for a deep bass backbeat that worked perfectly with the delicacy of the fiddle.

But while the instrumentation was clearly providing a layer, or indeed many layers, to The Gathering’s unique sound, it is clearly Chisholm’s fiddle, or rather his playing of it, that defined much of the core sound. His dexterity in both hands produced sounds I have never heard from a fiddle, littered with lilting grace notes, created by the bow in his right hand, or the fingers of his left, and many times both together.

It would be easy to attribute the sound to the acoustics of the venue, but as lovely as the setting was, the sound is evident in his studio recordings too ( I just had to listen to the album while writing this review). Chisholm isn’t just the key player, he is actually the singer without using any words. His exceptional fiddle skill is the ‘voice’ of the Gathering. He mader reference to the advantage of not being a vocalist, but I think he is underselling himself. His fiddle IS his voice. He sings a string-song.

Any competent musician can play Mendelssohn, I doubt anyone could replicate the depth and tone of Chisholm’s ‘voice’.

Chisholm composes a tune with an image in his head. His visualisation of the place or thing helps him create a musical interpretation of it. By doing this, he feels he can conjure the same image in the listener’s mind. Given the style of Sandwood the album and the other-worldliness of Sandwood the place, I think he’s pretty darn close.

So let’s see what images Sandwood left on my mind.

A Pilgrimage explores the lonely desolate moor that stands between civilisation and the bay. The music doesn’t walk you across the moor, it transports you, there is wind, vast openness, big sky, anticipation. It’s not a short track, but it’s just far too short.

In The Light of Tuscany I see the warm afternoon sun that lights up the cliffs in an orange glow. Or is it the strange change in colour of the sand which goes from almost white to deep orange when wet?

Chisholm wrote Dizzy Blue in June and it just oozes excitement and movement. I’m looking at the sky, revelling in cloudlessness, dancing among the surf, treading stepping stones across the burn. It’s a playful piece buoyed by the wind instruments, and a masterpiece of Scottish traditional music in a brand new package.

In A Precious Place, he told the audience, he pictures the Dunes, and while I listened, I pictured the beautiful pale sand that sweeps up to the machair from the ripples in the wet sand created by a fusion of water and wind, the distant hills and rocky coastland that entraps the bay, I closed my eyes and almost felt a light breeze brush past me. Did someone open the door and let in some September air or had Chisholm done his work? I’d like to think the latter.