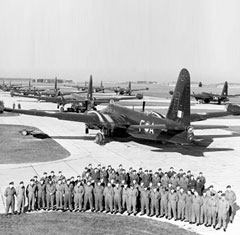 There was a constant demand for new bomber crews during the Second World War, not only to staff the numerous bomber squadrons being formed, but also to replace the thousands lost as the war went on.

This enormous task involved the setting up of scores of Operational Training Units (O.T.U) and to house these numerous airfields had to be provided. The Midlands of England was the favoured regions for such airfields, but the flat areas in Morayshire was also to be the location for four such training bases.

The permanent R.A.F Station at Kinloss was involved in the role of bomber crew training, where it had become the home of No.19 O.T.U in May 1940. All of these establishments were expanding and required the services of an additional satellite airfield RAF Forres, was situated to the south west of the small township of Forres which was know colloquially as Balnageith. RAF Forres became fully operational when 19 OTU ‘D’ Flight moved in during January 1941. 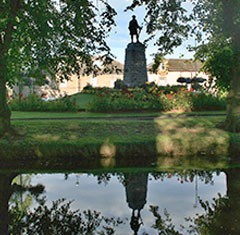 As the drainage was reasonably good no runways were laid, and only certain lengths of taxi track were provided. One concrete section, with the majority of dispersal points, hugged the banks of the River Findhorne for half a mile. Twenty-two frying pan shaped aircraft dispersal points were laid, some of which were to the north side of the A96 road, right up against the railway line. Only one ‘T2 type’ steel hangar was erected on the east side of the grass landing area, but there were several technical and domestic sites scattered along the country lanes further to the east, which could accommodate 1000 personnel.

The airfield opened on the 25th of January 1941 under the control of No.91 Group, Bomber Command, to act as a satellite to Kinloss. Sections of No.19 O.T.U then moved in with a fleet of around 20 Whitleys aircraft, plus a lesser number Avro Anson that were used as a lead- in to the heavier Whitleys.

The role of these units was the bringing together of pilots, navigators, bomb-aimers, wireless operators and air-gunners, then training them to operate as a team. After completing the 12 weeks course they would then proceed onto operational bomber squadrons, more than likely stationed in Yorkshire, which at this early stage of the war were also operating with Whitley bombers.

All the above aircrew trades had already completed their basic trade training at other stations, but the pilot now had to get used to handling the heavy Whitley, whilst the rest of the crew had to get to know their particular duties, especially on the long distance night navigation exercises.

Although the airfield was not fitted with electric approach lighting, much night flying took place from Forres using paraffin ‘Gooseneck’ flares for the flarepath, as it was more prudent to have the airfield illuminated here than give away the location of the main station.

Flying ceased for a while in January 1942 after the grass surface became waterlogged, but this only interrupted the training programme for a few weeks, when it was back to scores of take off and landings every day, seven days a week. However, from 25th of May 1943 to the 11th of November 1943 the airfield was also used by Airspeed Oxford aircraft based at Dalcross, whose student pilots would perform circuits and landings here.

The obsolete old Whitleys were replaced by Vickers Wellingtons in mid 1944, but by then the number of crews passing through the system began to taper off as losses were then were thankfully far less. Although No.19 Operational Training Unit kept active through to the end of the war, they had no need for this airfield after the 22nd of October 1944, when all personnel and aircraft returned to Kinloss.

After clearing the station of all stores and equipment, the Air Ministry loaned most of the domestic facilities to the War Department in November 1944, for use as a Prisoner of War Camp, where it served in this capacity until mid 1947. The disused airfield was then allowed to slowly decay until it was sold off in the early 1950s, after which it quickly reverted back to agricultural land.

Part of the old airfield was to witness further flying activity in more recent times, when a concrete strip was used by executive aircraft serving the company that owns Mundole House, located at the southern corner of the wartime airfield.

The T2 hangar and nearly all the other buildings have long since gone, but there are still many concrete hard-standings in evidence at the time of writing in 1980, on which have been built many bungalows that now form the suburbs of Forres.
Author: Guy Jefferson