Moray’s destination marketing organisation launched a major campaign at Belvenie Castle yesterday to win the backing of tourism businesses as it embarks on a new funding model.

Moray Speyside Tourism wants to form a TBID (Tourism Business Improvement District), which will ensure the organisation’s future for at least five years and make more money available for campaigns and staff. This will allow it to build on its work to make Moray a world-class tourism destination.

Last year tourism was worth £130 million to the Moray economy, with the region welcoming almost 800,000 visitors who supported more than 2,800 local jobs.

A TBID is a scheme where businesses pay a levy, and in the case of Moray Speyside, would more than double the amount of funding available to invest in tourism. The current financial model comes to an end later this year.

“But funding for that organisation runs out later this year and we could easily lose out to other regions who are actively promoting themselves.

“By introducing a Tourism Business Improvement District we could become only the second area in Scotland to take advantage of this opportunity and all the benefits it brings.”

If successful, Moray Speyside will become the second TBID in Scotland following the launch of a similar scheme for Inverness and Loch Ness running since 2014. It also joins 200 regular Business Improvement Districts such as Oban and Lerwick which have BIDs with a strong focus on tourism.

The proposal will be put to a vote this summer, with 400 local tourist-related businesses having a say.

Several businesses in the sector have already shown their support for the campaign. General Manager of Dowans Hotel in Aberlour, Steph Murray, said: “A Tourism Business Improvement District would lead to more investment in our increasingly important tourist industry but it would also allow local businesses like us to decide what our money should be spent on. This might be more advertising in key markets, building more walking and cycling trails, or producing maps and guides to the region.”

Business Improvement Districts have been used very successfully in the United States where they have generated in excess of $250 million for the economy.

Local businesses pay a yearly levy based on their income. The money is managed by the members and invested locally.

“Until recently this part of Scotland had been unpromoted and therefore overlooked. After attending an event with Moray Speyside Tourism in 2017 we have been actively promoting and selling the region to clients around the world, notably in the USA and Germany. Working with the travel trade is by far the best and quickest route to success in attracting overseas tourists but the effort needs to be ongoing in order to compete against destinations all over the world.”

Research carried out with a sample of 138 local tourism businesses last year suggested that a majority are in favour of the principle of a Business Improvement District. 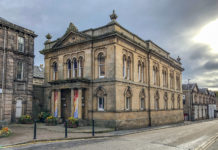 Gunshots fired in a 'targeted attack' in Glasgow

National news wpengine - January 17, 2020
0
Shots have been fired at a property in Glasgow in what police are calling a targeted attack. Source: Scotsman Read full story: Gunshots fired in a...

13 of the most unusual animals ever discovered in Scotland

National news wpengine - January 17, 2020
0
From polar bears to big cats, a broad range of unexpected and bizarre animals have been found nationwide over the years. Source: Scotsman Read full story:...

Armed man threatens shop staff with a knife before stealing thousands of pounds worth...

National news wpengine - January 17, 2020
0
A five-figure sum of foreign currency has been stolen from a travel agent in Newton Mearns, East Renfrewshire during an armed robbery. Source: Scotsman Read full...