As the area registered its biggest increase in confirmed cases of COVID-19 in a single day, it has emerged that an aircraft hangar at a former RAF base could be put to use as a mortuary if the need arises.

Moray Council has been granted permission to use an empty aircraft hangar at Kinloss Barracks where Nimrods were kept when it was an RAF base, but stressed it was hoped the facility would not be needed.

Preparations are in place for more similar measures across the country as the number of confirmed cases and deaths increase. NHS Grampian, which includes Aberdeen City, Aberdeenshire and Moray, saw a jump of 22 confirmed cases today (1 April) with new cases appearing for the first time in Orkney and the Western Isles.

Jim Grant, Moray Council’s head of economic growth and development said: “As part of its emergency planning procedure Moray Council approached the MoD to use hangar facilities at Kinloss Barracks as a standby mortuary. This was agreed.

“Similar to other local authorities, the council has to plan for the worst-case scenario emerging from the C-19 pandemic.

“As people are following Scottish Government advice and staying home, we hope that the extra capacity made available to us by the MoD will not be required. However, it’s incumbent upon the council to ensure measures are in place to cope with whatever results from the pandemic locally.

“We would ask everyone to adhere to the Scottish Government guidance to stay at home so that the number of deaths is reduced and facilities such as this will not be needed.”

Wimbledon in June and Edinburgh Fringe in August are the latest high profile events called off as the Government indicates the lockdown could last longer than initially anticipated. 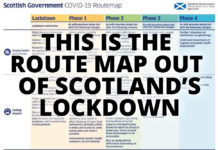 Scotland’s route out of lockdown is published in full today