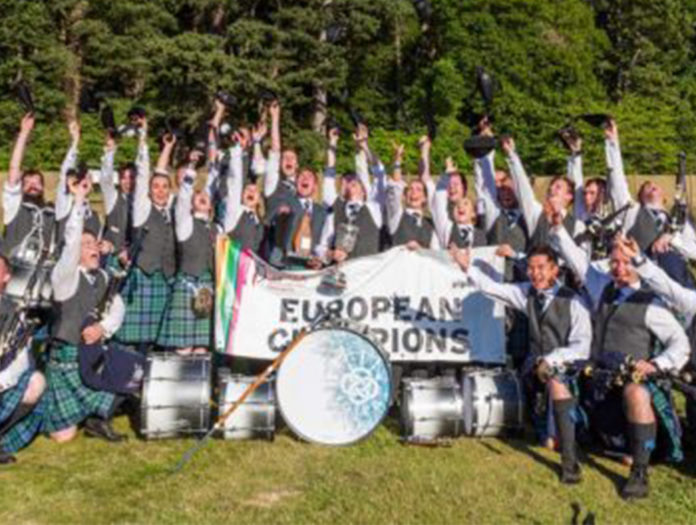 Inveraray and District Pipe Band have been crowned European Champions at Piping At Forres.

Inveraray celebrated their win for the second year in a row at the European Pipe Band Championships which was held in Forres in Moray for the final time on Saturday following a six-year run.

Competitors and spectators were delighted when it was announced the Championships would be staying in the Highlands when Alan James, Chieftain of the event, revealed it will moving to Inverness for the next three years.

Alan James, who performed the role of Chieftain but is also Chairman of Forres Events Limited which has organised Piping At Forres since 2013, said he was delighted the Championships were staying in the area.

“I want to say how well today’s event has gone. The level of expertise and the professionalism shown by all the competitors has been tremendous. I have thoroughly enjoyed listening and watching the bands perform and, as chieftain, I was lucky enough to do a full tour of the park meaning I got to meet with stallholders, sponsors, and visitors. We were delighted to have over a thousand young pipers as well as a record number of young Highland Dancers. Everyone seems to have enjoyed their time at Piping At Forres today.

“I would like to thank the organising committee and the hundreds of volunteers who have worked so hard over the last six years to make the Championships such great events enjoyed by thousands of people and bringing millions of pounds of economic benefit to the local area.”

He added: “It has also been an honour to be able to announce that the Championships will be moving just along the road to Inverness. This is great news for the Highlands that the Royal Scottish Pipe Band Association has chosen to locate the European Pipe Band Championships in Inverness from 2019. This will continue to encourage the pipe bands from the Highlands and Islands as well as the North East to attend.

Piping At Forres moves to Inverness

“We wish the new organisers all the best for the next three years and we look forward to attending and showing our support at the Championships in 2019.”

The event in Inverness will be organised by LCC Live Event Services and will be held at Bught Park on Staurday 29 June 2019.

Les Kidger, Director of LCC Live, said: “We’re absolutely delighted to be bringing the European Pipe Band Championships to Inverness. Not only will the event bring significant economic benefit to the city, but it will showcase Inverness and the surrounding area to visitors from across Europe for one of the most illustrious events in the Scottish calendar.”

Piping At Forres which is sponsored by Benromach Speyside Single Malt Scotch Whisky was attended by thousands of pipers, drummers and visitors from all over the world including a band from Australia.

Ian Embleton, chief executive of the Royal Scottish Pipe Band Association, said he was thrilled with how the final Piping At Forres went: “We have enjoyed an incredible day at Piping At Forres. I am very sad that we will not be coming to Forres next year, however I am extremely grateful for the warm welcome the people of Forres have given us over the last six years. The Championships have been very popular with the bands and we have made many friends in this area. I hope that we may be invited back sometime in the future.”

Back by popular demand for the second year was the AES Solar Science Tent and “Have A Go Row” which provided visitors with numerous interactive activities including an organic vegetable orchestra and the chance to race solar boats.

Alasdair Henderson, pipe sergeant with the band said: “It was one of the strongest performances we have ever given. We are delighted.”

The event not only included world-class piping and Highland dancing but it also featured the World Tattie Scone Championships which this year was won by Lara and her 4-year-old daughter Arianne who assisted.

Their tattie scone consisted of halloumi, aubergine, lemon, honey with a thyme dressing.

Lara from Inverness said: “We based the tattie scone on Arianne’s favourite meal which is mashed tatties with lemon and thyme and halloumi. We came and had a go last year, but didn’t compete, but she has been talking about it ever since so this year we thought we would give it a go. We are delighted although surprised we won.”

FACT is granted £116k to buy town hall for community

Margaret Grant death: 39-year-old man has been arrested in connection to Restalrig attack

National news wpengine - February 18, 2020
0
Police have stated that a 39-year-old man has been arrested in connection with an alleged assault and robbery at the home of a vulnerable...

Scots minister whose mother was killed by terrorists forgives those responsible

National news wpengine - February 18, 2020
0
A minister has spoken of how his mother and close relatives were killed in a terrorist suicide attack, as he made an emotional address...

National news wpengine - February 18, 2020
0
Pop star Harry Styles was mugged by a man with a knife and forced to hand over cash on Valentine's Day in London. Source: Scotsman Read...

National news wpengine - February 18, 2020
0
A friend who appears to be the 'life and soul of the party' could be most in need of help as people who struggle...