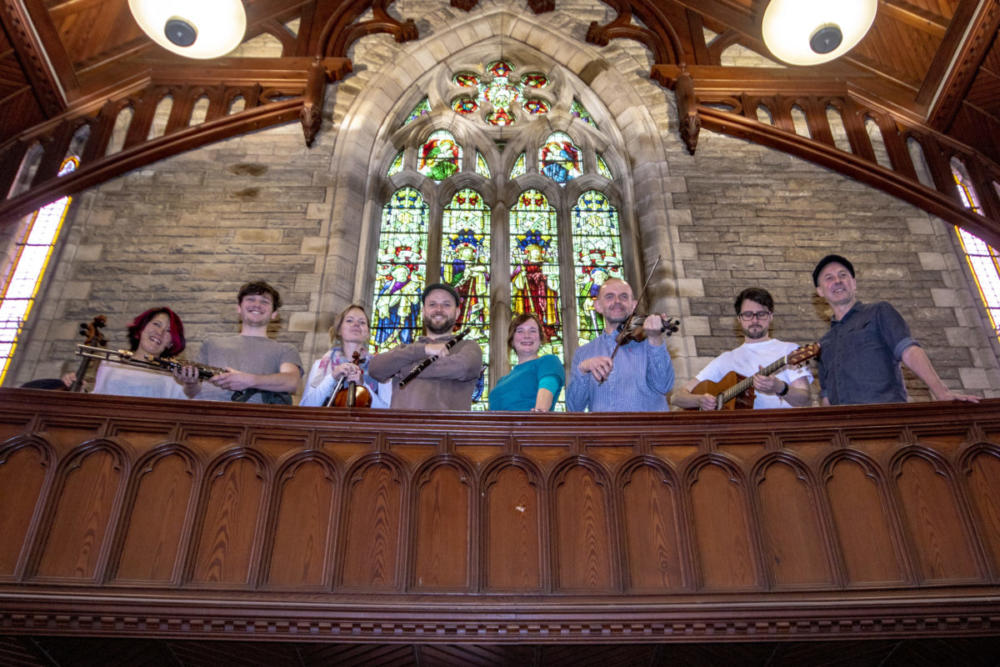 The third Findhorn Bay Festival will spring into life today – a spectacular six-day celebration of arts and culture running from Wednesday 26 September to Monday 1 October.

Events and performances will offer ‘something for all’ with artists of local, national and international renown. Staged in unexpected spaces and scenic locations around the Bay of Findhorn, the Festival is set to attract visitors to the Forres area from far and wide.

Speaking ahead of the event, Findhorn Bay Festival Director Kresanna Aigner said: “The Findhorn Bay Festival offers an enormous opportunity for all in the Forres area and Moray. Local businesses will be boosted, young people are given the chance to shine and learn, visitors can become immersed in quality arts and cultural activities, and the Moray area can be spotlighted as a ‘go to’ tourist destination.”

“The atmosphere and anticipation for the Findhorn Bay Festival is buzzing now. We have had such fantastic local support during preparations and we are ready to welcome visitors from across Scotland, England, Ireland and further afield from Germany, South America and Australia.

“We are excited to open the creative door of Moray to the world. The Findhorn Bay Festival undoubtedly shines a spotlight on the area as a go-to destination as well as providing a unique stage to showcase local and national creative talents.”

Local artists include emerging musician Michiel Turner, from Forres, who will perform as part of a triple bill including Blue Rose Code and Adam Holmes & The Embers. Moray based DJ Lewis Lowe will host a late-night set after The Langan Band performance in Findhorn. The Mad Hatters of Moray will entertain during Family Cabaret and out and about over the Festival weekend.

Dave Martin and Graeme Roger will be bringing Sub-Asian Sound Kitchen to an evening of multi-cultural music and food alongside Forres restaurant Cardamon Spice and world-renowned Celtic fusion band Shooglenifty. Forres-based artists Hannah Laycock and Kenneth Le Riche will be exhibiting some of their work in Forres and community choir Bukhari will open the Mr McFall’s Chamber concert at the Universal Hall. Dance artist Karl Jay-Lewin of Findhorn will premiere Extremely Pedestrian Chorales whilst DJ Monkey Magic from Kinloss will keep audiences on the dance floor at the Glitter & Sparkle Festival Ball.

More than 60 local participants will take to the stage in the world premiere theatre production of The Buke of the Howlat, supported by the Year of Young People 2018 Event Fund.  Students from Drumduan Upper School and Moray College UHI will be joined by parkourists, a choir and members of Out of the Darkness Theatre Company in the outdoor musical adventure alongside a cast of professional award-winning actor-musicians in celebration of The Year of Young People.

Visiting artists include Duncan Chisholm: The Gathering for the Festival Opening Concert in St Laurence Church. BBC Radio 2 Folk Singer of the Year, Karine Polwart will be joined on stage with brother Steven Polwart and Fair Isle musician Inge Thomson.

Alan Bisset’s rip-roaring shows The Moira Monologues and More Moira Monologues are set to perform to a sold-out audience and the new and acclaimed Frozen Charlotte/Stadium Rock production of NESTS is sure to take audiences on a poignant journey.  Music, birdsong and nature are explored in Northern Flyway and Scottish Opera will be returning to the Festival with four singers and a pianist set to delight at Forres Town Hall with Opera Highlights.

On the Saturday during the festival, September 29 (11am to 4pm), Culture Day Forres will return for a fifth year filling the streets, parks, shops and public buildings of Forres with a carnivalesque explosion of arts and cultural activities FREE for all the family to enjoy. On Culture Day Forres, Tolbooth Street will be closed to traffic making way for a new Mini-Market of good local food alongside stalls, outdoor theatre, music and more.

The Mini-Market will take place as part of Making More of Moray; a new project, supported by the Moray LEADER Programme and EventScotland, part of VisitScotland’s Events Directorate, which will bring a taste of the region’s delicious food offering to events throughout the six-day Festival.

Jo Robinson, VisitScotland Regional Director, said: “Findhorn Bay Festival is once again bringing a wonderful celebration of arts and culture to Moray Speyside for locals and visitors alike to enjoy. It is fantastic to see that the colourful programme has something to offer for all tastes and ages, especially as we are celebrating Scotland’s Year of Young People.

“The events and activities on offer will shine a spotlight on the region’s inspiring young people, rich culture and impressive artistic talent as well as delicious local produce featured as part of the Making More of Moray strand. I am looking forward to six exciting days filled with fun and entertainment for all.”

See also: Festival in a Day