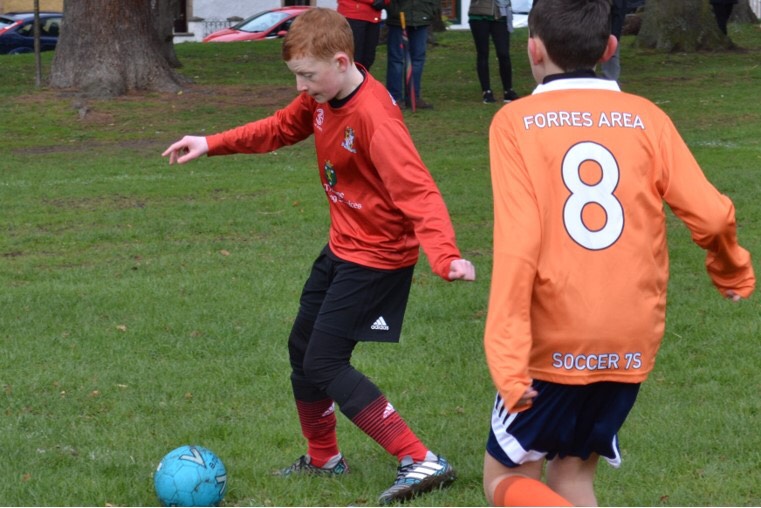 Strong start to the match by Sinclair Taylor going 2-0 up early on, Cluny fought hard to get back in the game but 2 late deflected goals sealed comfortable result

Great game to watch for the parents both teams played well. Game was settled by a superb hat trick from Ben Fraser – Pulford. Fraser Bros managed to grab a late consolation.

Competitive game with Firthview taking their chances 2 goals from Finlay Price and the 3rd added by Finlay McQueen.

Close fought game on show here. Lewis scored early for Lossie Garage, Fraser Bros fought hard to grab an equaliser however were to be denied by excellent goalkeeping by the lossie garage goalkeeper pulling off save after save.

Cluny raced into a 2 goal lead thanks to a clever close range finish by Riley, this was swiftly followed by a thunderbolt from Sebastian, Credit union grab a late goal but were unable to find the leveller.

Both teams worked hard to make this a close fought match, both teams scored within a minute of each other and then Sinclair Taylor sneaked the winner.

Fast action match on show, H2G were far too strong and over ran Canary players however they never gave up

End to end match. Great defending on show by Firthview’s Luca Stewart halting plenty of attacks. A brace from Finlay McQueen sealed the win although a late consolation from Riley made it tense at the end.

Result does not tell the whole story here Fraser bro’s started well but failed to convert their chances, George Bairns made them pay with 3 great goals, Blair put the icing on the cake with the 4th goal for Sinclair Taylor but despite the score Fraser Bro’s kept going.

Two hard working teams with good defending on show from both teams. 3 great goals with Credit Union edging it.

Tom Ross showed some great passing during this match, Swiftly moving into a 2 goal lead Cluny snatched a late goal to apply pressure but then a 3rd gola from Tom Ross sealed the win.

A close fought match ended in both teams cancelling each other out by scoring 2 goals a piece, Very entertaining match and this was a fair result.

Goals galore during this match. Firthview raced into a 4nil lead, however Charlie Allan reduced this to 4-2 with 2 good goals, with their tails up H2G went searching for more but on the counter Addison broke a scored sealing the win for Firthview.

Match started off very even with both teams having chances to take the lead. Fraser Bro’s stepped up the attacks and scored 3 quick goals the best of the bunch was a cracker from Ethan Maclean

Well done to Macleans, Good competitive match from start to finish and great skills on show. Great debut from Harris who also managed his first goal as well.

Close game with 2 great goals by Logan and Lewis

Lots of chances on show today by both teams Firthview scored a late scrappy goal to win.

Even contest Sinclair edged it in the end with 2 clinical goals.

Early goal scored by Lennox made it a tough start for Yuy’s but the team worked hard to set up Ethan to score an equaliser, Malones then went ahead scoring a further 3 more to end the contest

Good attacking game by both teams. Fantastic movement and passing on show keeping the crowd entertained. Grigor and Young snached victory right at the end.

Very even and fast paced match with the scoreline 2-2 at halftime. Start of 2nd Half Grigor and Young showed great teamwork and scored 2 goals to end the match victorious.

A quick start from beaver show them take the lead which was swiftly followed by a 2nd goal to double their lead. Mundole pulled one back thanks to Owen however Beaver then increased the lead, Mundole scored late on in the game but it was too late.

Both teams gave it their all in this entertaining match, all players played fairly some cracking goals were on show today.