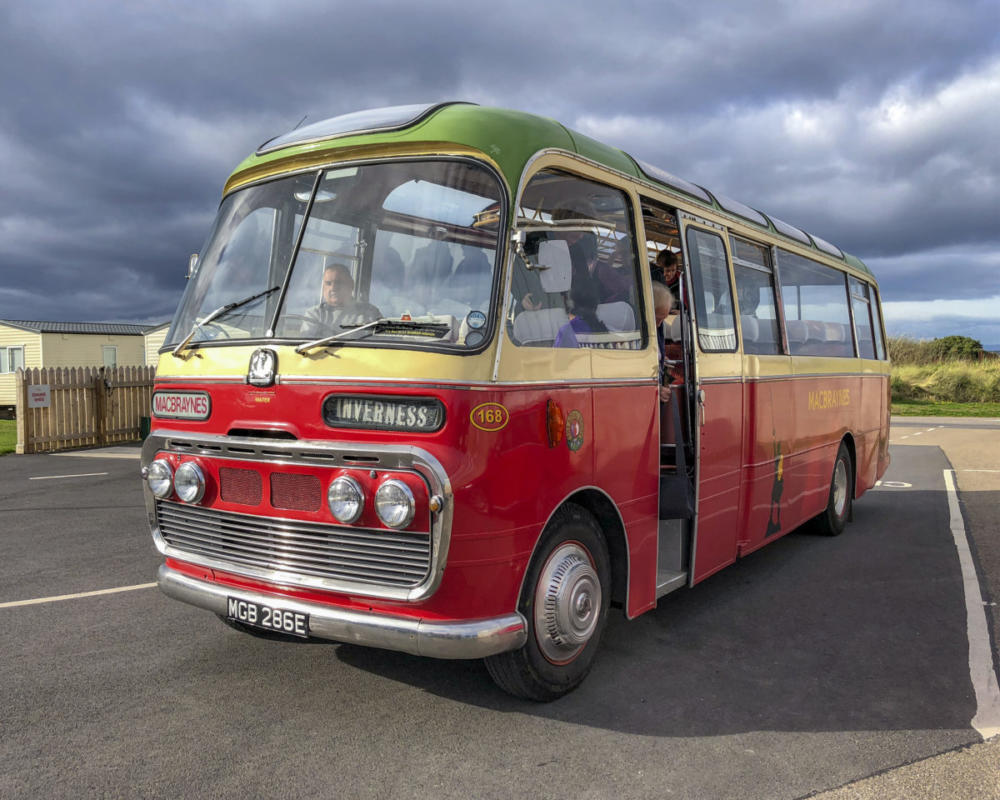 Moray Art Centre was a fitting pick-up point for a tour of artists’ studios and art exhibitions during Findhorn Bay Festival.

The three destinations in our ‘Secret Studio Tour’ were geographically dispersed, so with every attention to detail, our transport was no less than a cultural trip back to the sixties in a vintage Bedford bus, lovingly preserved with cream and red Macbrayne’s livery. Equally colourful was our host, working artist and Findhorn Bay Arts board member Bob Kenny, who kept us entertained between the gear changes.

The first stop on our journey was the studio of Jonathan Wheeler, a painter of Scottish landscapes in watercolours. If you are a resident or visitor to this area, it’s highly unlikely you have never seen one of his paintings.

As well as an accomplished and prolific artist, he is an astute businessman and has turned his passion into a lucrative enterprise, painting, printing and posting his pieces of art from his tiny studio in his home in Findhorn.

Most of his work has a distinct blue/orange style, but the tour of his studio gave us access to a much larger library of stock than you would see in a local shop, I was particularly drawn to a painting of the River Divi, from a place where the waterway is flanked by high banks and even higher trees. The result was a very verdant landscape devoid of the blues and oranges you normally expect from a Wheeler.

As we left, Jonathan, gave all 26 members of the tour a gift bag, which included a mounted landscape print. A very nice gesture, but I’ll be darned if someone else bagged the green Divi picture I had my eye on.

The tour continued to Hopeman for a photographic exhibition. And we heard a little more about the bus. Delivered new to MacBrayne’s and started service in Mull, then sold and moved to Shetland, before being bought by a collective and now operating as a novelty, but functional, hire bus. The driver-owner reckoned it had covered a million miles, and despite being 50 years old, parts are readily and cheaply available.

In the newly-opened former Railway Station at West Beach Caravan Park, was a selection of photographic prints telling the story of North Sea Fishing.

But we’re not in for a chocolate-box line-up of brightly-coloured trawlers tied up in port with a rippling reflection in the still waters of Buckie harbour.

Jeremy Sutton-Hibbert is a documentary photographer, and when he boarded a working seiner trawler in the 1990s to take a series of pictures, he’s was stuck on it for ten days.

The series of pictures are a tale of life at sea, where fishermen give up the niceties and safety of the land, for what could realistically be described as a journey into a watery gulag. And it’s an exhibition highly relevant to the region. Despite the decline of fishing in the north-east, it is part of the heritage, architecture and culture of this area, and always will be.

The pictures, taken on film of course, illustrate a culture that few get an insight into. The contrasty, monochrome processing, emphasises the bleak, cold, wet, hard life these guys are subjected to. No wonder they have a good time when they get to shore.

The battling of elements, the vastness of the ocean, the chill of being quite literally ‘in the middle of nowhere’ is perfectly captured by Jeremy in a series of pictures, that not only shows the working part of fishing the north sea, but also the home that a boat becomes for the ten-day trip.

Jeremy captures the downtime too. Eating, cooking, sleeping, resting, playing, reading, smoking, all in cramped conditions, that are only a thin piece of wood away from the harsh reality of their next shift.

It’s a piece of work that would be moving if it was one single picture, but the 30 or so pictures, take you through a journey that will make your next fish supper a much more thought-provoking meal.

The vintage bus is luxury in comparison, and it is back on the road again to Elgin, this time to see the artists’ collective space MC3 Studios.

When the Royal Mail moved out of the Post Office here, they left a 1970s box of empty offices, that have been turned into a shared space for artists, which has been particularly useful for those studying for, and postgraduates of, the Fine Art degree currently on offer at Moray College UHI.

Here I met four of the artists who opened their doors for their tour.

Charlie Fitzgerald’s works are powerful equine portraits and it is no surprise she has a strong online following for her work.

Hungarian artist Anna Kajos graduated with a degree in Fine Art two years ago and is currently working on an abstract painting in acrylics.

Amy Methven is a digital artist who creates comic art on her computer and uses her medium to livestream and vlog about her creations.

Allannah Spence moved to Elgin from Shetland and is studying for a Fine Art degree in Elgin. Portraits are her speciality and she posed with two that she painted of her sister Leanne.

What struck me about this studio is the artistic talent lurking in a featureless building that thousands of people drive by every day.

That a space such as this exists allowing artists to benefit from a collective studio before or after graduating from what is a thriving art degree course is to be congratulated.

A small town like Elgin is producing artists that have somewhere affordable to continue their craft as a business. You could almost say it has an art quarter, yet it is, as the tour suggests, still a secret.

It is, of course, the remit of Findhorn Bay Arts who run the festival for which this tour is a part, to not only bring arts and culture to the area as a stimulant but also to show that, whether you are an artist or consumer of art, this is one hell of a creative place.