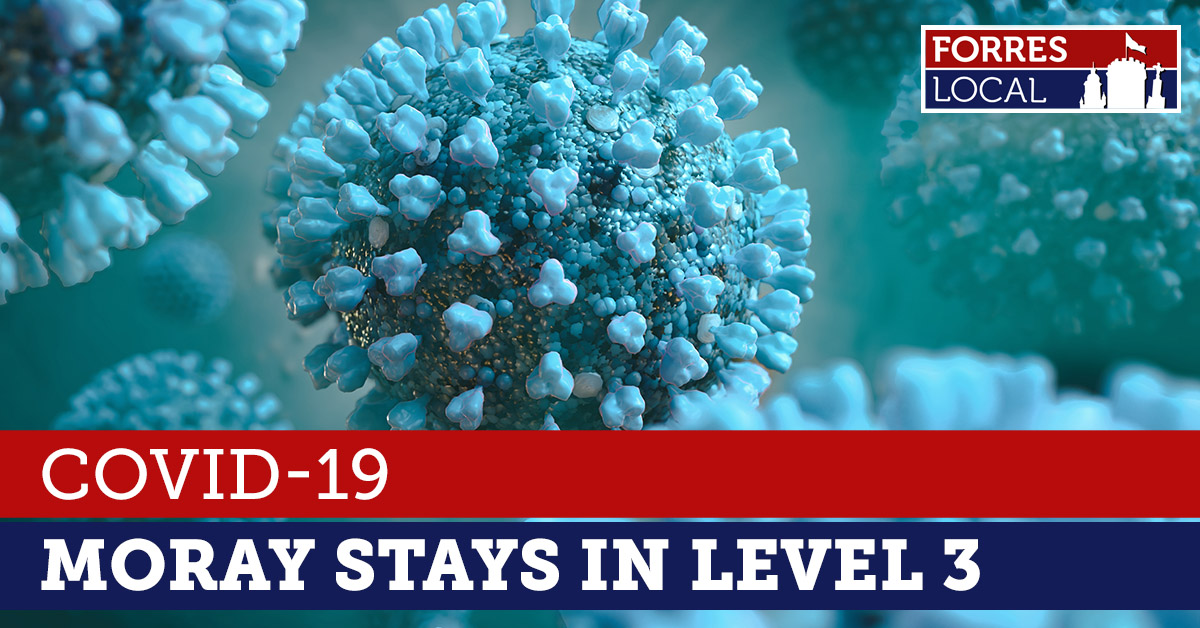 All of Moray will stay in Level 3 for another week from Monday 17 May, the First Minister has confirmed today.

Moray Council’s Chief Executive, Roddy Burns, said: “I know it’ll be disheartening for Moray residents and businesses, and those with plans to visit the area, that we’ll remain in Level 3 of restrictions from Monday. There’s reassurance that Moray is doing well, we’re just not there yet. So we’re optimistic that extended restrictions will only be for a short time, and we’ll soon be joining the rest of mainland Scotland in Level 2 and enjoying more of the freedoms that come with this relaxation.

“This is only a possibility due to the huge community effort in the last couple of weeks. We’ve seen a 400% increase in testing, and thousands of residents have been rolling up their sleeves as part of the accelerated vaccination programme. My heartfelt thanks to our council and NHS colleagues delivering testing and vaccinations, to all those who have taken part, and to those in our business community who have helped facilitate this. These measures are vital in driving down transmission of the virus here in Moray, and we’re making progress – let’s keep at it.

“Meantime we can still support local businesses safely as we pull together to get out of this particularly challenging period, as we prepare to welcome visitors back to Moray – responsibly – as soon as possible.”

Deputy director of public health at NHS Grampian, Chris Littlejohn, said: “The number of new cases identified each day has levelled off over the past week. Around 80% of new infections are in those linked to known clusters and settings, up from around a third when concern was growing about Moray numbers. This flattening of case numbers, and the reduction in new infections where the source is unknown, suggests that the community outbreak across Moray is coming under control. We are grateful for the continuing willingness of people to get tested, so that cases and contacts can be found and isolated, to now begin bringing the number of new infections down.

“This progress has been made because people are doing the right things – getting tested, sticking to the guidelines and self-isolating when required to. Vaccination continues at pace, and our testers and contact tracers continue to work tirelessly to support the area.

“The current restrictions and interventions appear to be working. This is not the moment to lower our guard. But we hope we can see the end of the current outbreak not too far ahead if we stick with it, and by another few weeks we should see the further impact from the accelerated vaccination program.

“We also need to ensure that when we do relax that cases are at a low enough level it is sustainable and numbers won’t rocket 14 days later again.

“We’ve seen a huge collective effort from the people of Moray, who are working alongside us to #ProtectMoray, and for that we cannot thank you enough.”

MSP Richard Lochhead MSP added: “The hopefully short delay in moving Moray to Level 2 is aimed at keeping everyone safe but of course the local community will be disappointed not to be able to meet up with loved ones indoors and take advantage of the other benefits of eased restrictions the rest of the country will now be able to enjoy from Monday.

“A number of local businesses particularly in the tourism sector will have already seen cancellations due to the recent rise in cases in Moray and will now face further pain and support for affected sectors is vital.

“Due to the Moray doing so well over the past year, to now find ourselves falling behind the rest of the country is very unfortunate but most people I have spoken to locally have been expecting this and will not be surprised that the public health advice is to be cautious.

“However, given the drop in positive cases and hospital admissions in recent days, and the increase in testing and the vaccination roll out, we can be optimistic that we are now heading in the right direction and hopefully will be able to join the rest of Scotland in Level 2 a week on Monday.

“That’s why it’s vitally important that we all follow the advice and regularly get tested and turn up for our vaccination appointments.

“I welcome confirmation that the situation is to be reviewed weekly which means this delay could be short lived.

“Finally, I pay a heartfelt tribute to the NHS staff and others who have put their shoulder to the wheel and worked hard given that resources have been poured into Moray to help contain the spread of covid.”